The rotting food that ends up in landfills produces methane, a major source of greenhouse gases.
Grocery bills are rising through the roof. Food banks are running short of donations. And food shortages are c 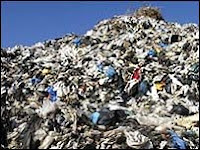 ausing sporadic riots in poor countries through the world.
You’d never know it if you saw what was ending up in your landfill. As it turns out, Americans waste an astounding amount of food — an estimated 27 percent of the food available for consumption, according to a government study — and it happens at the supermarket, in restaurants and cafeterias and in your very own kitchen. It works out to about a pound of food every day for every American.
Grocery stores discard products because of spoilage or minor cosmetic blemishes. Restaurants throw away what they don’t use. And consumers toss out everything from bananas that have turned brown to last week’s Chinese leftovers. In 1997, in one of the few studies of food waste, the Department of Agriculture estimated that two years before, 96.4 billion pounds of the 356 billion pounds of edible food in the United States was never eaten. Fresh produce, milk, grain products and sweeteners made up two-thirds of the waste. An update is under way.
The study didn’t account for the explosion of ready-to-eat foods now available at supermarkets, from rotisserie chickens to sandwiches and soups. What do you think happens to that potato salad and meatloaf at the end of the day?
A more recent study by the Environmental Protection Agency estimated that Americans generate roughly 30 million tons of food waste each year, which is about 12 percent of the total waste stream. All but about 2 percent of that food waste ends up in landfills; by comparison, 62 percent of yard waste is composted.
The numbers seem all the more staggering now, given the cost of groceries and the emerging food crisis abroad.
After President Bush said recently that India’s burgeoning middle class was helping to push up food prices by demanding better food, officials in India complained that not only do Americans eat too much — if they slimmed down to the weight of middle-class Indians, said one, “many people in sub-Saharan Africa would find food on their plate” — but they also throw out too much food.
And consider this: the rotting food that ends up in landfills produces methane, a major source of greenhouse gases.
America’s Second Harvest — The Nation’s Food Bank Network, a group of more than 200 food banks, reports that donations of food are down 9 percent, but the number of people showing up for food has increased 20 percent. The group distributes more than two billion pounds of donated and recovered food and consumer products each year.
The problem isn’t unique to the United States.
In England, a recent study revealed that Britons toss away a third of the food they purchase, including more than four million whole apples, 1.2 million sausages and 2.8 million tomatoes. In Sweden, families with small children threw out about a quarter of the food they bought, a recent study there found.
And most distressing, perhaps, is that in some parts of Africa a quarter or more of the crops go bad before they can be eaten. A study presented last week to the United Nations Commission on Sustainable Development found that the high losses in developing nations “are mainly due to a lack of technology and infrastructure” as well as insect infestations, microbial growth, damage and high temperatures and humidity.
In many major cities, including New York, food rescue organizations do nearly all the work for cafeterias and restaurants that are willing to participate. The food generally needs to be covered and in some cases placed in a freezer. Food rescue groups pick it up. One of them, City Harvest, collects excess food each day from about 170 establishments in New York.
“We’re not talking about table scraps,” said Joel Berg, executive director of the New York City Coalition Against Hunger, explaining the types of wasted food that is edible. “We’re talking about a pan of lasagna that was never served.”
Source: BBC and New York Times
Aporte: Guillermo Figueroa
Publicadas por Unknown a la/s 5/30/2008 02:33:00 p.m. No hay comentarios.:

AMA, AVMA and ASM join forces on One Health initiative

Inter-relationships among human, animal, and environmental health
A new initiative will help physicians and veterinarians better respond to outbreaks of zoonotic diseases, officials report.
Dubbed the One Health Initiative, its goal is to bring veterinary medicine, human medi

cine and environmental sciences together to build a national strategy.
Unveiled at the recently concluded AVMA meeting, the collaboration aims to improve systems to recognize, monitor and treat zoonotic disease.
Dr. Roger Mahr explains, "The convergence of animal, human and ecosystem health clearly dictates that the 'one world, one health, one medicine' concept must be embraced. Together we can accomplish more to improve health worldwide than we can alone."
Dr. Ron Davis, president-elect of the AMA, adds, "Emerging infectious diseases, with the threats of cross-species transmission and pandemics, represent one of many reasons why the human and veterinary medical profession must work more closely together."
News of the collaboration was unveiled to reporters this week at the AVMA
The American Society for Microbiology (ASM) has endorsed the One Health Initiative, which recognizes the inter-relationships among human, animal, and environmental health and seeks to enhance communication, cooperation, and collaboration in integrating these areas for the health and well-being of all species.
“The goals of the One Health Initiative are consistent with the ASM mission of applying and communicating knowledge of microbiology for the improvement of health and environmental and economic well-being worldwide,” said ASM past president Dr. Stanley Maloy, who chairs ASM’s Communications Committee.
Source: http://www.asm.org/Media/index.asp?bid=58319
Aporte: Guillermo Figueroa
Publicadas por Unknown a la/s 5/19/2008 10:12:00 a.m. No hay comentarios.:

A stronger certification process in exporting countries will be implemented.
The US Food & Drug Administration (FDA) is beginning a multi-year hiring scheme that could ease strain on its ability to react in times of crisis, though the initiative do

es not likely go far enough for detractors both within and outside the agency who say it is dangerously under funded.FDA recently announced that in the 2008 fiscal year it is looking to fill more than 600 new positions as well as backfill over 700 others as part of the 2007 FDA Amendments Act, the Food Protection Plan and the Import Safety Action Plan. Though this represents nearly triple the amount hired between 2005 and 2007, the fact the agency's mandate is vast and that it is not guaranteed to actually find such specialized staff mean the initiative may not quickly translate into more effective surveillance for consumer goods.FDA announced it is looking to hire hundreds of staff with science and medical backgrounds to monitor the safety and effectiveness of a number of categories of products of which food is only one small part. These categories include human and veterinary drugs, biological products, medical devices, food, cosmetics, and products that emit radiation. In November 2007, the government announced wide sweeping plans to improve the safety of the US food supply, with measures including more stringent inspections, stronger penalties and mandatory recalls. The Food Protection Plan and the Import Safety Action Plan emerged as part of this.These two plans aim to prevent contamination in the domestic food chain and to ensure the safety of imported food.Under the Food Protection Plan, FDA will also be able to issue additional preventive controls for high-risk foods, accredit third parties for voluntary food inspections, increase access to food records during emergencies, and issue a mandatory recall if voluntary recalls are not effective.The Import Safety Action Plan comprises short- and long-term recommendations to enhance the safety of the increasing volume of imports entering the US.Among the measures outlined by the plan is the creation of a stronger certification process in exporting countries, a greater US presence overseas, and stronger penalties for those responsible for selling unsafe products.
Source: FDA http://www.fda.gov/jobs/hiringinitiative08.html
Aporte: Guillermo Figueroa
Publicadas por Unknown a la/s 5/09/2008 10:49:00 a.m. No hay comentarios.: