The Salmonella Poona outbreak first disclosed to the public last Sept. 4, and since found to be caused by imported Mexican cucumbers has now rolled into the new year with up to two additional deaths and 50 more cases in 16 states since the last report from the federal Centers for Disease Control and Prevention in Atlanta. CDC Tuesday issued its first update on the deadly outbreak since last Nov. 19, saying  888 illnesses and six deaths are now associated with the Salmonella Poona outbreak in 39 states. The dangerous outbreak has sent 191 to local hospitals for care.  And 106 illnesses have occurred since the recalled cucumbers should have no longer been available in grocery stores or restaurants.
This is the same outbreak where the Food and Drug Administration (FDA) traceback investigation ended up at the Rancho Don Juanito de R.L. de C.V. located in Baja, Mexico as the source of the contaminated cucumbers that were then shipped into the United States via a San Diego produce distributor.
To correct the apparent violation, Rancho Don Juanito de R.L. de C.V. was told it needs to demonstrate it has identified the potential sources and routes of contamination and have taken steps to prevent future contamination before the company’s cucumbers can be removed from the Import Alert.
Six deaths have been reported from Arizona (1), California (3), Oklahoma (1), and Texas (1). However, the California Department of Public Health, says Salmonella infection was considered to be a contributing factor in only one of the three deaths in California.
Andrew & Williamson Fresh Produce reports that the Limited Edition cucumbers were distributed in the states of Alaska, Arkansas, Arizona, California, Colorado, Florida, Idaho, Illinois, Kansas, Kentucky, Louisiana, Mississippi, Minnesota, Montana, New Jersey, New Mexico, Nevada, Oklahoma, Oregon, South Carolina, Texas, and Utah and reached customers through retail, food service companies, wholesalers, and brokers.
The company further reports that these cucumbers are shipped in a black, green, yellow, and craft colored carton which reads “Limited Edition Pole Grown Cucumbers.”  This variety is often referred to as a “Slicer” or “American” cucumber.  It has a dark green color.  It typically has a length of 7 to 10 inches and a diameter of 1.75 to 2.5 inches.  In retail it is typically sold in a bulk display without any individual packaging or plastic wrapping.  In food service it is typically served as part of a salad.
Source: http://www.cdc.gov/salmonella/poona-09-15/
Publicadas por Unknown a la/s 1/27/2016 09:41:00 a.m. No hay comentarios.: 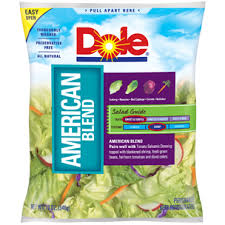 Vegetables were produced at Springfield, Ohio Dole Processing Facility.
Epidemiologic and laboratory evidence available at this time indicates that packaged salads produced at the Dole processing facility in Springfield, Ohio and sold under various brand names are the likely source of this outbreak.
State and local health departments are interviewing ill people about the foods they may have eaten or other exposures in the month before their illness began. Of five ill people who were asked about packaged salad, all five (100%) reported eating a packaged salad. Two (100%) of two ill people who specified the brand of packaged salad eaten reported various varieties of Dole brand packaged salad.
Twelve people infected with the outbreak strain of Listeria have been reported from six states since July 5, 2015. The number of ill people reported from each state is as follows: Indiana (1), Massachusetts (1), Michigan (4), New Jersey (1), New York (4), and Pennsylvania (1). WGS has been performed on clinical isolates from all 12 ill people and has shown that the isolates are highly related genetically.

CDC and state and local public health partners are continuing laboratory surveillance through PulseNet to identify additional ill people and to interview them.Updates will be provided when more information is available.

The source of the causative food vehicle has not been elucidated yet.

Listeriosis patient isolates in Germany have shown a new identical pulsed-field gel electrophoresis (PFGE) pattern since 2012 (n = 66). Almost all isolates (Listeria monocytogenes serotype 1/2a) belonged to cases living in southern Germany, indicating an outbreak with a so far unknown source.
Case numbers in 2015 are high (n = 28). No outbreak cases outside Germany have been reported.

Next generation sequencing revealed the unique cluster type CT1248 and confirmed the outbreak.
Investigations into the source are ongoing. Since November 2012, a previously not observed pulsed-field gel electrophoresis (PFGE) pattern in human isolates of invasive L. monocytogenes serotype1/2a has been detected in Germany with increasing frequency. Altogether 66 outbreak cases have been recorded, with 28 cases in 2015. Four cases were pregnancy-associated and six cases died in the course of the disease. Here we provide details of the ongoing outbreak.

Outbreak description: Since 2009, all German Listeria isolates submitted to the National Reference Centre (NRC) for Salmonella and other bacterial enterics at the Robert-Koch Institute (RKI) or to the Austrian-German binational reference laboratory (KL) for Listeria at the Austrian Agency for Health and Food Safety (AGES), have been tested with PFGE for clonal relationship. Submission of isolates is encouraged by public health authorities but is voluntary without legal obligation.

Between November 2012 and November 2015, altogether 793 isolates from notified listeriosis cases were typed, which accounted for 45% of all cases in that period (n=1,765). In southern Germany, this proportion was higher (ca 60%) and since 2012, human isolates of L. monocytogenes serotype 1/2a with the NRC internal nomenclature of the AscI/Apa I pattern 13a/54 have been observed.

Regarding the source of the causative food vehicle, the results showed a heterogeneous picture. Until now, we have not observed cases with an epidemiological link to an institution (e.g. hospital infection). Preliminary results largely exclude fish and cheese products as a possible source but this has to be complemented by systematic screening of Listeria isolates collected from food. Based on sequencing results, a PCR protocol aiming to detect CT1248 was developed for screening of isolates and published on the KL website.