Genome sequencing of environmental Escherichia coli expands understanding of the ecology and speciation of the model bacterial species.

Use of E. coli, as a marker for food contamination, need to be revised.

Defining bacterial species remains a challenging problem even for the model bacterium Escherichia coli and has major practical consequences for reliable diagnosis of infectious disease agents and regulations for transport and possession of organisms of economic
importance.
E. coli traditionally is thought to live within the gastrointestinal tract of humans and other warm-blooded animals and not to survive for extended periods outside its host; this understanding is the basis for its widespread use as a fecal contamination indicator.
Here, we report the genome sequences of nine environmentally adapted strains that are phenotypically and taxonomically indistinguishable from typical E. coli (commensal or pathogenic).
We find, however, that the commensal genomes encode for more functions that are important for fitness in the human gut, do not exchange genetic material with their environmental counterparts, and hence do not evolve according to the recently proposed fragmented speciation model. These findings are consistent with a more stringent and ecologic definition for bacterial species than the current definition and provide means to start replacing traditional approaches of defining distinctive phenotypes for new species with omics-based procedures. They also have important implications for reliable diagnosis
and regulation of pathogenic E. coli and for the coliform cell-counting test.
Source: Proceedings of the National Academy of Sciences (PNAS).
Publicadas por Unknown a la/s 4/15/2011 03:17:00 p.m. No hay comentarios.: 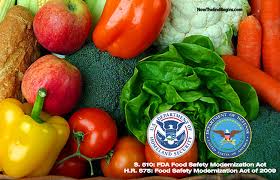 The Food and Drug Administration (FDA) has launched an easier-to-use version of its food recall search engine, in direct response to Food Safety Modernization Act requirements.
Under the Food Safety Modernization Act, which President Obama signed into law on January 4, the FDA was required to create a more consumer-friendly version of the food recall search site within 90 days.
The new version presents recall information by date in table format going back to 2009, and includes product brand name, product description, reason for the recall and the recalling firm, as well as whether the recall is ongoing or completed.
The FDA’s deputy commissioner for foods Mike Taylor said in a statement: "The new search page not only provides consumers with an easy-to-read table of information on products they are searching for, it also represents the delivery of one of the first major actions called for under the Food Safety Modernization Act. That delivery is on time and right on target and we appreciate the involvement of our stakeholders."
The table also includes links to news releases for each recall, providing more detailed information for consumers.
The agency said it consulted with a number of consumer and industry organizations on the most suitable format for presenting recall information, including the Grocery Manufacturers Association, the Center for Science in the Public Interest, the Food Marketing Institute, and Consumers Union, among others.
"We welcome the suggestions of those with first-hand experience in communicating information to consumers about food recalls," Taylor said. "We intend to continue to reach out to stakeholders as we make additional improvements in sharing recall information."
Other provisions of the Food Safety Modernization Act include granting the FDA authority to order recalls, when previously it could only request that a company withdraw a product from the market (with the exception of infant formula); giving the agency greater access to food manufacturers’ safety procedure documents; and requiring companies to keep more detailed food safety records.
Taylor added that whether the FDA has ordered a mandatory recall, or has provided a company with the opportunity to initiate a voluntary recall, the agency’s new food recall website should be a reference point for consumers whenever they have questions about a food recall.
The new search engine can be found in http://www.fda.gov/Safety/Recalls/default.htm
An illustration comparing the FDA’s old and new food recall search engine sites is available online http://www.fda.gov/Food/FoodSafety/FSMA/ucm249433.htm
Source: Food Quality News.com
Publicadas por Unknown a la/s 4/05/2011 11:32:00 a.m. No hay comentarios.:

Carbon nanofibers to detect E. coli and Salmonella are under development by scientists in the US.

Researchers at Kansas State University are using carbon nanofibres (CNF) as part of the biosensors to detect the bacteria, an application which could have a huge take up in the state’s huge meat processing sector, they said.

Jun Li, associate professor of chemistry, and doctoral student Lateef Syed, said they chose CNFs because they are able to form an array of tiny electrodes even smaller than bacteria and viruses. When these microbial particles are captured at the electrode surface, an electric signal can be detected.

The CNFs and the circuits underneath are encapsulated with silicon dioxide (SiO2) to provide electrical insulation and mechanical anchoring. Excess SiO2 is removed by mechanical polishing and reactive ion etching so only the very end of the CNF tip is exposed.

“This embedded CNF nanoelectrode array chip is then packaged with counter electrodes and reference electrodes in a microfluidic chip through which the sample solution can be passed through”, said Li.

The team aims to calibrate the system to detect specific pathogens. The final system should be able to detect 1 bacterium in 100 mL water (the EPA standard) in less than an hour without going through polymerase chain reaction (PCR) or culture.

The project was initially supported Canadian-based Company Early Warning Inc., which provided the K-State research team with $240,000 for two years as part of the developmental work. Recently, the US Department of Homeland Security Center of Excellence for Emerging and Zoonotic Animal Diseases, or CEEZAD, has come on-board.

"Kansas is a leading state in meat production and the poultry industry," said Sayed. "Any outbreak of pathogens in these industries causes huge financial losses and a lot of health risks. We want to prevent these outbreaks by detecting pathogens at an early stage."