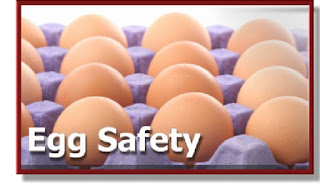 Consumers, restaurants, and retailers should not eat, serve, or sell recalled shell eggs distributed by Good Earth Egg Company.
How to identify recalled eggs:
·         Recalled eggs distributed by Good Earth Egg Company were sold under different brand names throughout the Midwest, including Missouri, Illinois, and Kansas.
·         Various sizes of eggs were packed in 6-count, 10-count, 12-count, and 18-count cartons, and 15 dozen cases and 30 dozen cases.
·         Codes and dates on recalled eggs include everything before and including: "252 - Sell By 10/8/16" and "Packed for" or "Produced for Good Earth Egg Company."
What to do if you have recalled eggs:
·         Throw away recalled eggs even if some of the eggs have been eaten and no one has gotten sick. Throw them away in a sealed bag in the trash so that children, pets, or other animals can't eat them.
·         Do not return recalled eggs. Good Earth Egg Company will work directly with each consumer to manage replacement of its product.
·         Don't try to cook recalled eggs and eat or serve them.
·         Consumers should wash and sanitize drawers or shelves in refrigerators where recalled products were stored. Restaurants and retailers should wash and sanitize any crates or other containers where the recalled eggs were held or sold.
o    Use a solution of chlorine bleach and hot water or another appropriate sanitizer, following the instructions provided on the label.
·         Wash reusable grocery bags often. Cloth bags should be washed in a washing machine, and plastic-lined bags should be scrubbed using hot water and soap.
Always follow food safety steps to handle and cook eggs safely to avoid foodborne illness from raw eggs. It's important to handle and prepare all fresh eggs and egg products carefully, from any egg pro
Source: https://www.cdc.gov/salmonella/oranienburg-10-16/advice.html 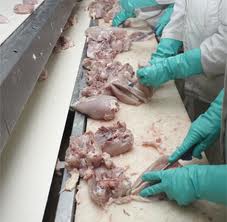 Poultry processing plants that do not meet Salmonella control performance standards will have to conduct new follow-up sampling procedures beginning early next year, according to a notice from the USDA’s Food Safety and Inspection Service (FSIS).
In a Dec. 16 notice, FSIS announced the new follow-up protocol for testing, referred to as sampling by the government, will take effect Jan. 13, 2017. The current performance standards for Salmonella and Campylobacter in not-ready-to-eat comminuted chicken and turkey products, including raw chicken parts, have been in effect since Feb. 11, this year.
The current allowable percentage positive rate for carcasses is 9.8 percent for young chicken and 7.1. percent for turkey during any completed 52-week moving window over the past three months.
FSIS has instructed its inspection program personnel (IPP) at poultry operations for young chickens and turkeys on the new procedures. Beginning on the start date next year, if Salmonella levels are exceeded, the poultry plants will be required to schedule carcass follow-up testing as soon as possible.
IPP staff are to inform plant management of the failure to meet the standards and conduct follow-up sampling when assigned by the Public Health Information System (PHIS). Currently the follow-up sampling will focus on carcasses only. Further instructions could expand the program’s target in the future.
The official notice says it is possible a poultry plant might fail during “consecutive moving windows,” but sampling will normally focus only on the “initial failure in a series.” IPP staff are not to “attempt to formally categorize an establishment by tracking their own testing results” since the FSIS Office of Data Integration and Food Protection (ODIFP) will be responsible for “performing this analysis and reporting.”
IPP staff will be responsible for providing the plant with a “sampling alert message” with details on the sampling that will occur. They also will meet with plant management.
ODIFP will conduct the follow-up testing, which is a largely automated process. It does rely on IPP staff collecting the samples, with at leat one per shift suggested.
Source: http://www.usda.gov/wps/portal/usda/usdahome?contentid=2016/02/0032.xml
Publicadas por Unknown a la/s 12/20/2016 10:08:00 a.m. No hay comentarios.: 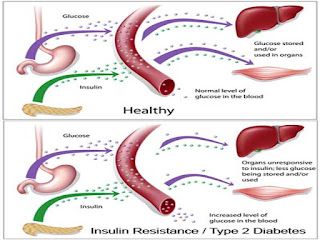