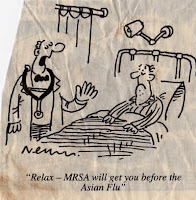 We don’t add antibiotics to baby food and Cocoa Puffs so that children get fewer ear infections. That’s because we understand that the overuse of antibiotics is already creating “superbugs” resistant to medication.

Yet we continue to allow agribusiness companies to add antibiotics to animal feed so that piglets stay healthy and don’t get ear infections. Seventy percent of all antibiotics in the United States go to healthy livestock, according to a careful study by the Union of Concerned Scientists — and that’s one reason we’re seeing the rise of pathogens that defy antibiotics.

These dangerous pathogens are now even in our food supply. Five out of 90 samples of retail pork in Louisiana tested positive for MRSA — an antibiotic-resistant staph infection — according to a peer-reviewed study published in Applied and Environmental Microbiology last year. And a recent study of retail meats in the Washington, D.C., area found MRSA in one pork sample, out of 300, according to Jianghong Meng, the University of Maryland scholar who conducted the study.

Regardless of whether the bacteria came from the pigs or from humans who handled the meat, the results should sound an alarm bell, for MRSA already kills more than 18,000 Americans annually, more than AIDS does.

MRSA (pronounced “mersa”) stands for methicillin-resistant Staphylococcus aureus. People often get it from hospitals, but as I wrote in my last column, a new strain called ST398 is emerging and seems to find a reservoir in modern hog farms. Research by Peter Davies of the University of Minnesota suggests that 25 percent to 39 percent of American hogs carry MRSA.

Public health experts worry that pigs could pass on the infection by direct contact with their handlers, through their wastes leaking into ground water (one study has already found antibiotic-resistant bacteria entering ground water from hog farms), or through their meat, though there has been no proven case of someone getting it from eating pork. Thorough cooking will kill the bacteria, but people often use the same knife to cut raw meat and then to chop vegetables. Or they plop a pork chop on a plate, cook it and then contaminate it by putting it back on the original plate.

Yet the central problem here isn’t pigs, it’s humans. Unlike Europe and even South Korea, the United States still bows to agribusiness interests by permitting the nontherapeutic use of antibiotics in animal feed. That’s unconscionable.

The peer-reviewed Medical Clinics of North America concluded last year that antibiotics in livestock feed were “a major component” in the rise in antibiotic resistance. The article said that more antibiotics were fed to animals in North Carolina alone than were administered to the nation’s entire human population.

“We don’t give antibiotics to healthy humans,” said Robert Martin, who led a Pew Commission on industrial farming that examined antibiotic use. “So why give them to healthy animals just so we can keep them in crowded and unsanitary conditions?”

The answer is simple: politics.

Legislation to ban the nontherapeutic use of antibiotics in agriculture has always been blocked by agribusiness interests. Louise Slaughter of New York, who is the sole microbiologist in the House of Representatives, said she planned to reintroduce the legislation this coming week.

“We’re losing the ability to treat humans,” she said. “We have misused one of the best scientific products we’ve had.”

That’s an almost universal view in the public health world. The Infectious Diseases Society of America has declared antibiotic resistance a “public health crisis” and recounts the story of Rebecca Lohsen, a 17-year-old New Jersey girl who died from MRSA in 2006. She came down with what she thought was a sore throat, endured months in the hospital, and finally died because the microbes were stronger than the drugs.

This will be an important test for President Obama and his agriculture secretary, Tom Vilsack. Traditionally, the Agriculture Department has functioned mostly as a protector of agribusiness interests, but Mr. Obama and Mr. Vilsack have both said all the right things about looking after eaters as well as producers.

So Mr. Obama and Mr. Vilsack, will you line up to curb the use of antibiotics in raising American livestock? That is evidence of an industrial farming system that is broken: for the sake of faster-growing hogs, we’re empowering microbes that endanger our food supply and threaten our lives.
Fuente: http://www.nytimes.com/2009/03/15/opinion/15kristof.html
Publicadas por Magaly Toro I. a la/s 3/27/2009 12:20:00 p.m. 2 comentarios:

Enterobacter sakazakii is a deadly pathogen for newborn babies
According to an AFP article, the Korean National Veterinary Research and Quarantine Service (NVRQS) detected a strain of bacteria called Enterobacter sakazaki in a shipment of 135 kg of canned organic baby formula imported last month from French producer, Vitagermine. However, the producer of the Babynat

formula said that the batch was analyzed prior to shipment and no bacteria were found. According to the NVRQS, eight shipments of the product, weighing a total of 1,492 kg, have been imported into South Korea since Dec. 2007, and six of these shipments, totaling 1,222 kg, reached the market.
The Korean quarantine service has secured four cans for testing. Results are expected sometime this week, and the NVRQS may order a recall if contamination is found. The World Health Organization has deemed E. sakazaki harmful, especially for newborn babies and those with weak immune systems. The bacteria can cause meningitis, enteritis, and in serious cases lead to death.
Source of Article: http://www.ift.org/news_bin/news/news_home.shtml
Publicadas por Unknown a la/s 3/06/2009 04:26:00 p.m. 4 comentarios: 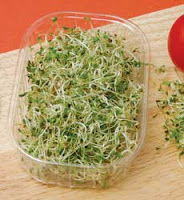 Lincoln—The number of salmonella cases in eastern Nebraska initially detected last week has increased, according to the Nebraska Department of Health and Human Services.

So far, there are approximately 14 lab-confirmed cases, with 4 considered probable ones and an additional 8 to 10 suspect cases indentified on the basis of reported symptoms.

The outbreak preliminarily has been linked to a source—alfalfa sprouts from a local grower, CW Sprouts from Omaha.

Last week and over the weekend, public health workers have been interviewing individuals involved in the outbreak, as well as people in a control group that helps interviewers determine the food source. The interviews led epidemiologists to conclude that sprouts were reported in a high number of food histories of ill people, thus there was a strong association with sprouts.

CW Sprouts has been very cooperative and is acting with an abundance of caution to voluntarily recall their sprouts.

The FDA and CDC are involved. FDA is doing an investigation at the company to determine conditions that may have lead to the contamination as well as determine distribution of the product.

Nebraska health officials from the Department of Health and Human Services will work with the Nebraska Department of Agriculture Laboratory to try to isolate salmonella from existing alfalfa seeds and sprouts to determine how the contamination occurred.

Salmonella is a bacteria. The serotype of salmonella in these cases is called saintpaul, a relatively rare kind. Samples have been sent to the Minnesota Public Health Laboratory to determine if they share a DNA fingerprint. This evaluation will conclusively show if all the cases are linked.