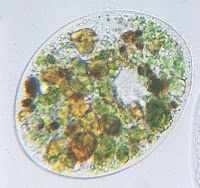 A first time survey of free-living protozoa in meat-cutting plants showed high diversity rates of various species including those that could harbor food-borne pathogens say researchers from Ghent University, Belgium.
Protozoa are unicellular microorganisms that feed on bacteria, and sometimes the bacteria survive and replicate within the protozoa, the study claims.
Bacteria such as Campylobacter, E. coli 0157:H7, Listeria and Salmonella that survive within protozoa may be able to resist desiccation and disinfectants, claims the team, which may explain how Salmonella food poisoning still occurs even after the processor takes the required safety measures.
They added that an increase in antimicrobial resistance and virulence of bacterial pathogens after passage through protozoa has been previously demonstrated.
They were visited 5 plant during February to May 2007 and samples were taken after a waiting period of two hours after cleaning and disinfection.

Results
The team found communities of amoebae, ciliates, and flagellates to be present in all the plants.
Protozoa were detected in floor drains, standing water on the floor, soiled bars of cutting tables, plastic pallets and out-of-use hot water knife sanitizers. In addition, protozoa were identified on surfaces which come into direct contact with meat.
“This survey showed that there is high protozoan species richness in meat-cutting plants and that the species included species related to known hosts of food-borne pathogens,” say the researchers.
“Locations which were inadequately cleaned and disinfected because of ignorance or inaccessibility (holes in plastic pallets, undersides of cutting boards and conveyor belts, and upper sides of rails) harbored protozoa,” concluded the scientists.
They said that further research is required to determine the survival of protozoa and their internalized bacteria in food processing environments under stress conditions such as heat, extreme pH values and disinfection.
Source: Jane Byrne, Applied and Environmental Microbiology 74. 18:5741-5749
Aporte: Mauricio Cruz
Publicadas por Álvaro Figueroa O. (ADM) a la/s 10/14/2008 02:42:00 p.m.