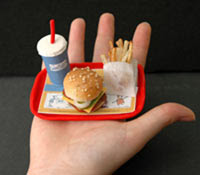 Nanotechnology refers to controlling matter at an atomic or molecular scale measured in nanometers, or millionths of millimeters. In the food industry, the technology has excited manufacturers as its potential uses are explored, including detecting bacteria in packaging, or producing stronger flavors and colorings.
But Dr Burdock claims that manufacturers lack understanding about how particles can change when they are shrunk to nano-size, and the current economic situation has exacerbated potential dangers, as some cost-cutting companies could look to cheaper, less reliable safety assessments.
Altered properties
One of the major safety worries about nanotechnology has been the suggestion that such small particles could feasibly cross cellular membrane barriers, meaning that an ingredient that is currently GRAS (generally recognized as safe) could become dangerous if it is nano-sized – a worry that Dr Burdock shares.
But problems could arise, he said, because – unlike genetic engineering – nanotechnology is “very cheap to get into”, a situation that further opens up the potential for unethical practices, such as not testing a newly nano-sized ingredient. “Manufacturers have a moral and ethical responsibility to test. Eighty percent of people play by the rules but you still have the bottom feeders,” he said.
For those manufacturers that do choose to explore the uses of nanotechnology, Dr Burdock said: “Once food manufacturers get something approved their job isn’t over. They have got to be very proactive…New data is being developed all the time and when it is, they need to make sure the person checking their product knows what they are doing.”
Indeed, it´s important to emphasize than there is not a policy about nanofoods yet, so the industry must have an ethical responsibility to prevent emerging diseases.
Fuente: Food Navigator
www.foodnavigator-usa.com/Product-Categories/Food-safety-and-labeling/Nanotechnology-The-new-asbestos/?utm_source=Newsletter_Product&utm_medium=email&utm_campaign=Newsletter%2BProduct
Aporte Leidy Beltrán
Publicadas por Miriam Troncoso a la/s 6/19/2009 09:19:00 p.m.