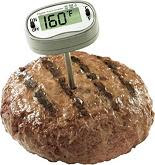 New research indicates that Salmonella in whole cuts of beef is more resistant to heat treatment than it is in ground beef.

The scientists found that there was a significant difference between ground beef and whole beef but that the degree of grinding made had no significant effect on heat resistance.

“Therefore, it would be prudent for Salmonella thermal inactivation models to consider whether a product is whole-muscle or ground but not necessarily the degree of grinding,” concluded the scientists.

To assess the relationship between the heat resistance of Salmonella and degree of grinding, four product types (whole muscle, coarsely ground, finely ground, and beef puree) were tested. Thermal resistance of Salmonella was highest (P <0.0001) in whole-muscle (D = 2.7 min), but there were no differences among the 3 ground products (Dmean=1.2min).

Testing the resistance levels, the scientists contaminated beef with an 8-serovar Salmonella cocktail and then packed it into 5g samples in sterile brass tubes, to be sealed, held at 60°C and removed at 30 second intervals.

All products were from the same original lot of beef, and were exposed to the same initial Salmonella counts and heat treatment. Differences in heat resistance were therefore due entirely to the degree of grinding.

The scientists put forward tentative explanations for the differences based on their own and previous research. They suggested that the water status in meat may influence the effectiveness of Salmonella inactivation and that bacteria may be suspended in the liquid component of the food.

But the authors tempered this suggestion saying they only set out to explore the relationship between physical structure and the thermal resistance of Salmonella and not to explain any links.